Find this article at:
go.ncsu.edu/readext?430862
— Written By Hanna Smith and last updated by Rhiannon Goodwin

Whether ordering from a catalog or perusing the shelves of a local seed store, gardeners today have access to an incredible array of choices when it comes to seed and plant variety. Many home gardeners are becoming more interested in growing heirloom varieties of vegetables and herbs, and even of fruits and berries.

Heirloom is a term that can refer to a cultivar that has been saved through the generations by a specific family or group (such as the Amish) or to an original species that is the same as that which grows wild in its native or naturalized environment. But most often, heirloom vegetables and fruits are those that home gardeners and small farmers have raised and selected over many years, and even generations, by saving the seeds of crops that performed best in their gardens. Heirloom vegetables differ by region for the simple reason that what grows and produces well here in Piedmont, NC, is not the same as what performs well along the southern coast, or in desert areas, or out west in Oregon or Montana. Heirlooms exist because gardeners through the years saved the seeds of favorite varieties for their desirable traits, which might include outstanding flavor, prolific production and long-season productivity.

Modern hybrid varieties are meant to be “improvements” over the old-time varieties now referred to as heirlooms. In some cases, the improvements benefit home gardeners by making widely available varieties that have better disease resistance or earlier production, or a trait such as a more compact growing habit. In many cases the development of hybrid varieties is a science, almost an industry, designed to aid commercial growers in their desire to produce predictable, uniform crops that can be harvested all at one time and that possess traits that lend themselves to easy shipping and long storage. When breeding focuses on these traits, often flavor and nutrition lose out, as well as production over a long season, which is preferred for home gardens. Hybrid varieties in any case have to be grown from purchased seed each year as they will not breed true to seed.

It is important to understand that the range of commercial crops grown nationwide (even worldwide) is quite narrow. In our country alone, which is still relatively young, there exist hundreds of heirloom varieties that you will never see in the grocery store. You can often find many heirloom varieties at farmers’ markets, but even that avenue is limited compared to the number of cultivars it is possible to raise.

Heirloom seeds are truly a valuable resource because of the diversity they offer, as well as the uniqueness and worth of each variety. There is a huge gene pool available through heirlooms that should not be taken for granted as it was necessary to produce today’s crops and will be just as essential in producing the crops of the future. Those gardeners who choose to grow heirlooms save the seeds from their own crops and share those seeds; they are participating in a process that has gone on for generations. This chain of events helps to preserve our heritage, as well as saving the old cultivars from extinction.

Saving and sharing seeds also means saving money on the purchase of new seeds, which is necessary for growing hybrid varieties. And the most tangible benefit to the home gardener is the harvesting and eating of delicious fruits and vegetables!

Many seed companies now offer a large number of heirloom varieties. In addition, a growing number of communities have periodic seed exchanges, at which gardeners can swap seeds or start their own collection to raise, save and share. Each vegetable can be researched individually to learn the traits of different heirloom varieties and the ones best suited for specific growing conditions. 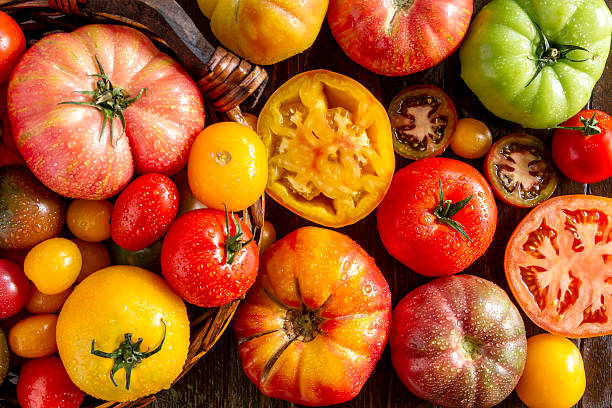 Heirlooms can’t be beat for flavor, interest, variety and nutrition. However, you might also find that heirloom tomatoes are thin-skinned and don’t keep as well as the hybrid varieties. Cucumbers might not be as resistant to powdery mildew. Peppers might have thinner walls and crack or break more easily. And so on. It is a trade-off. The wonderful part is that you can have it both ways – you can grow some hybrids for better disease resistance or because you want a bush habit or some such trait, and you can grow heirlooms because they taste great and produce all season long. Happy gardening!

For more information, please refer to these resources:

We also have a few other email lists you can subscribe to.