Japanese Beetles and Their Control

— Written By Hanna Smith and last updated by Deb Fuller

While I was walking in the parking lot the other day I walked past a plant and I noticed that there were 10 Japanese beetles on 3 leaves. 10! They seemed to really love the plant that they were on, and fortunately they were on an invasive vine growing up in a holly. While this is a situation where the Japanese beetles can readily attack and eat this plant to our benefit, most of the time they are munching on the plants that we don’t want them to.

Japanese beetles can feed on the foliage, flowers, and fruit of over 275 different 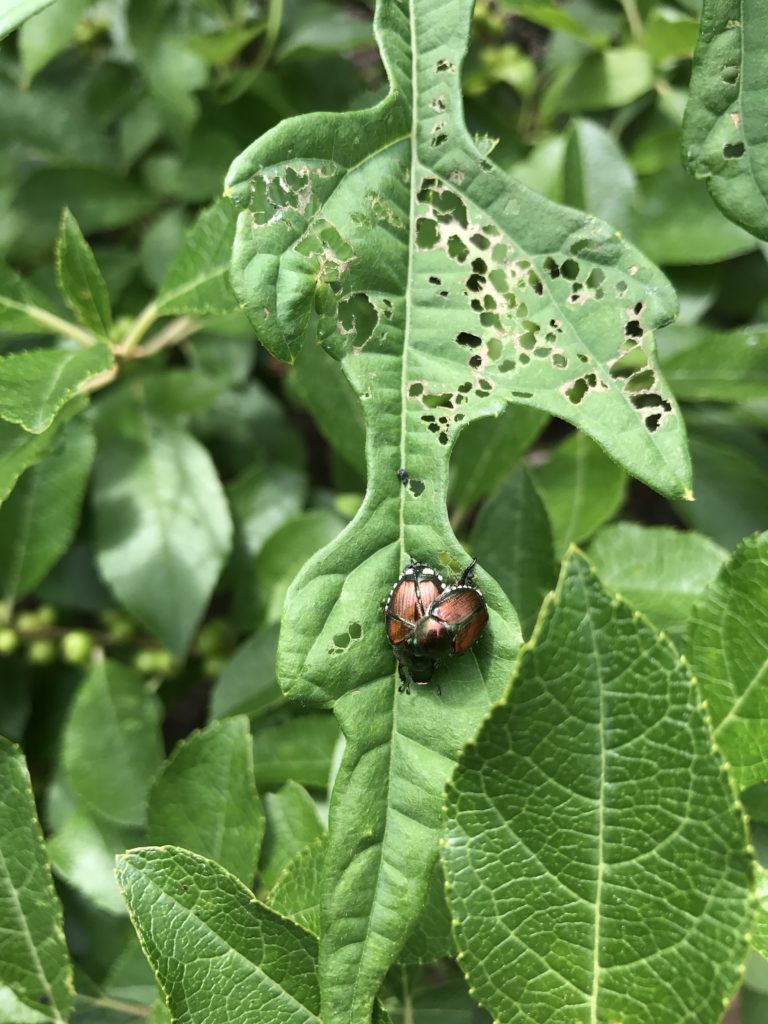 Adult Japanese beetles and their damage

plants! Their favorites include roses, crape myrtles, linden, hibiscus, crab apple and elm. But don’t let that fool you, they are opportunistic, and will feed on many more. Damage of Japanese beetle feeding will look like holes chewed in the leaves, or also what’s referred to as ‘skeletonization’, where the upper leaf surface has been eaten or the tissue has been eaten between the leaf veins. The good news is that in most cases the damage is mostly aesthetic and is unlikely to cause serious damage to a healthy, well-established plant.

One control recommendation is to plant plants that Japanese beetles don’t like to feed on, but a lot of the times that’s hard to do, especially if you already have a well-established plant or landscape. Another recommendation is to use the good, old-fashioned way – if you see Japanese beetles on a plant, pick it off and squash it or put it in a bucket of soapy water. Japanese beetles are also attracted to other beetles and that’s why you see them congregating together sometimes. If you see this happening, shake the plant to dislodge the beetles so that they move on to something else, or shake them into that bucket of soapy water.

If you have a low threshold to Japanese beetle damage, meaning that you don’t want a lot of damage done to your plant, there are insecticides available. Look for active ingredients such as carbaryl, imidicloprid, and pyrethrin. Products change frequently, so it’s always best to look at the active ingredients, and always read the label to make sure that Japanese beetles are listed as an insect that is controlled by that product. Also read the label to make sure that you can apply that product to the specific plant in your landscape. Also, remember that insecticides kill insects, and that some of these products can kill beneficial insects and pollinators, so use them as a last resort and apply them properly. When applied according to the label, insecticides labeled for Japanese beetle control can be very helpful in reducing populations on the plant that it was applied to.

The last bit that I want to finish with is what about Japanese beetle traps? Japanese beetle traps are not control devices, and are much more effective in attracting beetles than trapping them, so you may wind up with more beetles in your yard than you bargained for. If you are going to use them, keep them far away from any desirable plant that could be damaged by Japanese beetles.

Want to read more about Japanese beetles and their control? Check out these links:

Japanese Beetles in the Urban Landscape

Want to attend free gardening classes? We have several different topics to choose from.